Dynare is a quite sophisticated software for economic simulations. It is mainly used for estimations of Dynamic Stochastic General Equilibrium Models (DSGE models). DSGE models are considered the state-of-the-art of economic simulations and predictions and they are used by plenty of central banks and ministries of finances all over the world.

Let me show you how Dynare works on a basic economic model. Let’s assume that we have a representative household who wants to maximize an expected present value of its utility in an infinite time horizon. If you are new in the RBC models theory, this may sound horrifying to you. So let me explain what this actually means.

We assume that household’s utility depends on both amounts of consumption and amount of free time. The household splits its time between work and free time. The more time it works the more consumption it can afford. On the other hand, the work is unpleasant and the household would rather enjoy its free time than spending time with work. So the household has to balance these two variables to maximize its utility.

. The lower values of

means that the household gets more impatient. Let’s remark time period as

. So if we multiply utility in the time period by

symbol to represent the expected value. The

symbol says that the expectations are being made into zero time period.

This is the formula of household decision problem:

We have two kinds of “symbols” in the formula. The symbols with

index are parameters. The values of the parameters are constant for all-time periods and they describe the household behaviour.

Let’s define the variables and parameters in the utility function. The

represents an amount of consumed goods at

is an percentage of disposable time spent by work at

is a parameter that gives us the “unwillingness” to work. If we increase the value of the parameter, the household will work less because the work is more unpleasant to it.

As you can see, the utility of the household at time

is given by the difference between utility gain from the consumption and disutility of time spent by work:

. Then this utility is discounted to its value at time 0 by multiplying by

. Because we want to calculate the sum of utilities at all-time periods, we add the sum.

is defined by variable

. The amount of work is given by variable

which already appeared in the utility function.

. This parameter represents the output elasticity of capital. So the production function formula is:

. The production function is multiplied by

. We also add a constant

, which can be used to fit the production function to some real economy. The

is a value of a stochastic shock at time

The amount of produced goods is split to consumption, depreciation and investment. So we can write the formula of the model constraint as

This formula is sometimes called as the law of motion for capital.

Finally, we must define the exogenous stochastic shock more closely. We assume that the shock value has some inertia. In other words, we can say that the value of the shock partly depends on its own value in previous time periods. For example, if the shock had high positive value at the previous period, it the value at this period will be more likely positive than negative. This is modelled by an autoregressive process. Let’s look at the process formula:

is given by its previous value

and by random value

. A higher value of the

parameter means that the present value of the shock is more dependent on its previous value. The stochastic variable is denoted by

. This variable is random and it’s generated by random number generator. But to be able to generate values of this variable, we need to set a random distribution of the variable and its parameters. In the most cases, the normal distribution is used. The normal distribution has two parameters: mean value and variance. Our mean value will be 0. The stochastic shock is the source of uncertainty, but it is not moving the economy permanently to one side. The value of variance is not restricted – it depends on how big uncertainty we want to have in the model.

will be denoted by

and we will set this derivative eqaul to 0:

This is the most complicated step for the solution and maybe is difficult for some people to understand the result. To make it clearer, I will write the formula without the sum. 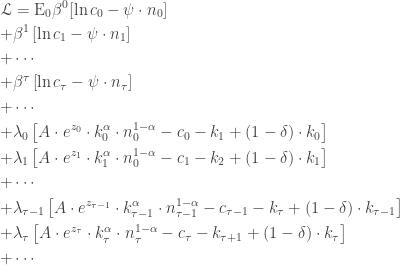 to represent one specifit time period. How would the derivative by the

looked like? We would cancel everything from the first part of the equation because there is no

in any utility function. We would also delete all constraints except the two ones multiplied by

. We also cancel all parts which don’t contain

. So at the end, we just need to compute the derivative of

. So the result is

This is the same formula as we computed above, only with different time index. We could compute the derivation for any other time period. So we can continue with the computing. As you can see, we have Lagrange multipliers

. It would be nice to substitute the multipliers. So let’s derivate the Lagrange equation by the conspumption. First, we will derive the formula by

We can rewrite the result as

Now, we will derive the Lagrangian formula by

Again, we can rewrite the result as

Now we can make the substitution:

, so it also formulates its expectations at time

We do easy modifications to get following formula:

So we will make a substitution:

Here we have the final formula:

The household increase amount of work until marginal utility of consumption multiplied marginal production of labor equal marginal disutility of work. This equation gives us amount of labor in the production.

We are finished with the manual computing, now we will write the model into Dynare.

Now we will write it into dynare.

This part contains the first order constraints equations. We have four equations which we need to solve the model. The first one is the Euler equation:

The second equation gives us the amount of labor.

The third equation is the law of motion for capital. Before we will write it into the Dynare, we need to shift it one period in the past. It is necesary for Dynare to identify the state variable – which is the amount of kapital. This change doesn’t change interpretaion of the model.

The last one is the definition of stochastic shock.

The is a description of the exogenous shock.

Now is our .mod file complete! We will discuss its results in another article.

Here you can see the complete code of our example.

[…] previous articles, we went through a simple DSGE model. We computed first order conditions and steady-state equations and we ran a simulation in Dynare. Maybe some of you were confused by […]